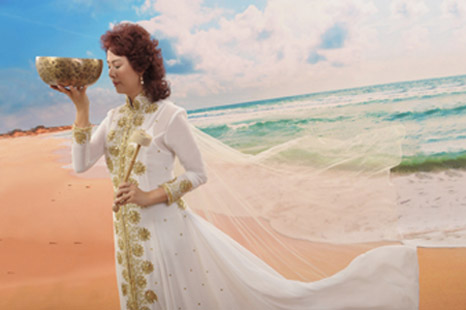 Who discovered a key to relief insomnia and raised emotional wellbeing

Master Mindy Chua is a spiritual leader, a pioneer in systematic Singing-Bowl Therapy education in Malaysia. She is also the founder of “Cosmique Touch” – A simple, effective and contemporary way of energy healing that was founded in 2004, with over 38000 practitioners worldwide. The Cosmique Touch Academy campus is located in the capital of Kuala Lumpur.

With a vow to nourish mankind, she has used the “Qi” energy to save many lives and helped countless of people to regain their health. She has set up more than 20 “charity Healing Centers” in Malaysia, leading over two thousand voluntary healers to offer free energy healing to the general public. This meaningful act of service has benefited thousands of people in need.

Apart from the Cosmique healing which featured the physical healing, Master Mindy started to seek for a new healing modality that help to improve one’s emotions and spiritual as a whole. As Deeply engrossed in the healing vibration of “Himalayan Singing Bowl”, she began her learning journey by integrating herself into numerous trips to India, Taiwan and Netherland to persue the most primitive and consummate therapy. After hundreds of attainment from the healing process, Master Mindy recognized a significant effect in improving insomnia and emotional illness.

With her intuition over decades of experiences in subtle energy healing, Master Mindy created one of the world most unique, powerful and yet relaxing form of Singing Bowl sound therapy technique that could sooth one’s soul, inner self Harmonising as well as helping everyone to release physical illness and pain.

Although singing bowl sound therapy has been widely accepted and well sought in the Western Nations and the Himalayan region, it is still making it’s absent in Asia. The exposure of Singing Bowl sound therapy is yet to be excavated. Therefore;

As a vow to initiate this amazing therapy to the world,

SHE, is the pioneer to develop singing bowl healing in Malaysia

SHE, is the first to incorporate comprehensive Sound Therapy Techniques into systematic education system

SHE, is the first to offer professional Sound Therapies training, and had fostered more than 50 qualified Therapies

SHE, is the pioneer to connect Sound Therapy to the general public in Malaysia through large scale Seminars and Grand Concerts Nationwide and in Singapore